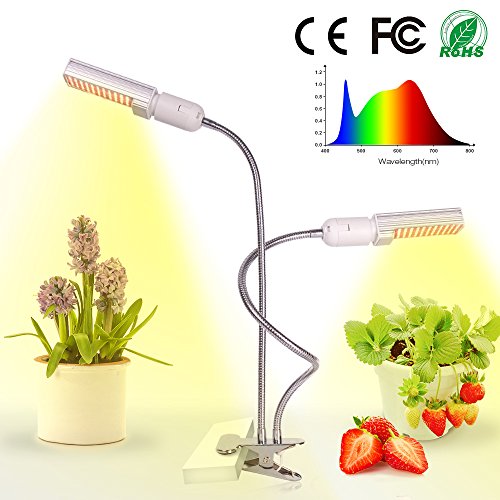 The Relassy LED Grow Lamp was primarily intended for use by those who live in small houses or apartments and don’t have a lot of space to dedicate to their gardening. At 28.7 inches in length, this LED lamp can be easily installed in small spaces, its slender body demanding next to no room to stand safely.

Although it is not reflected in its performance, the Relassy LED Grow Lamp comes in at a remarkably low price point. This has made it a popular choice for those attempting to grow cannabis indoors without spending hundreds of dollars. Given its slight dimensions, however, the Relassy LED Grow Lamp should not be relied upon to provide light to several plants at a time.

When you purchase the Relassy LED Grow Lamp, you will receive pretty much everything you need to ensure it performs to its highest standard. Inside the box you will find the dual-head LED grow light itself, as well as two additional spotlights and a comprehensive user manual designed to streamline the installation of the lamp.

The Relassy LED Grow Lamp boasts a full-spectrum dual-head effect, with red light for photosynthesis, blue light for compact growth, green light for canopy penetration, UV light for sterilization and disinfection, and IR light for warmth and cell development. With an 18-inch gooseneck and a 120 degree beam angle, the Relassy LED Grow Lamp ensures your plant will be fully immersed in its light, while its three different lighting modes make it possible to use it to grow a great deal more than cannabis.

One of the great selling points of this lamp is its longevity. As Relassy happily points out, the LED Grow Lamp boasts a fin-shaped heatsink design, which promotes greater heat dissipation, allowing it to perform to a high standard for an extended period of time. Meanwhile, its 88 LED chips promise no luminous decay for 18 months.

LED lamps are pretty straightforward, but when you are using one to grow a plant, there are a couple of things you need to know. In the below video, you will be guided through some of the most important steps to follow when using the Relassy LED Grow Lamp – or, indeed, any LED growth lamp – as a source of light for your indoor garden.

If you’re hoping to grow larger plants or more than one plant at a time, the Relassy LED Grow Lamp probably isn’t the way to go. Instead, we suggest you consider something like the 600W LED Grow Light from ZXMEAN. The ZXMEAN 600W LED Grow Light is undeniably one of the most visually impressive LED lights for indoor gardening, but it is also one of the most effective. With a maximum power of 600 watts and a consumption of just 115 watts, this lamp is powerful without being wasteful.

With its almost unrivalled heat dissipation, it can be left on for extended periods of time without risk of damage (some report leaving the lamp turned on for 14 hours straight without issue). One of the major selling points of the ZXMEAN 600W LED Grow Light is its silent operation, which allows it to be turned on overnight without risk of disturbing the owner or their roommates.

It should be pointed out, however, that ZXMEAN asks for slightly over $60 for this lamp, making it twice the price of its Relassy counterpart.

If keeping costs down ranks among your primary concerns in your search for a growth lamp, the Relassy LED Grow Lamp is one of the finest options available to you. At its price point, it promises to grow your marijuana to maturity in as timely a manner as possible. With its three adjustable settings, you can also use it to grow other plants, as well as fruit and vegetables, so you can even grow your own healthy snacks for when that infamous hunger hits.

LED vs HPS Power Consumption: Which Is Better?

Can You Use LED Lights To Grow Marijuana Plants?