Quick Navigation
How Does an E-Cigarette Work?
Is It Safe to Use?
Smoking vs. Vaping Weed
Smoking marijuana can cause respiratory issues.
A lot of weed goes up in flames when you smoke it.
Vaping is simply more enjoyable.
The Health Risks of Smoking a Joint
Rolling papers are bleached.
Your joint is possibly steeped with chemicals.
Smoking your joint will cause second-hand smoke.
Conclusion

E-cigarettes were primarily created to lessen the health risk of tobacco products. The main culprits of tobacco products, especially cigarettes, are two: the nicotine that’s, unfortunately, addicting and the harmful elements created during the combustion process. This can be inhaled not just by the smoker but also by other people through second-hand smoke.

Fortunately, with the advent of vaping technology, e-cigarettes (most of them are commonly known as “vapes” or “vape mods”) have been created to give smokers an alternative. Not only can they help reduce the consumption of nicotine little by little, but they will also remove the health risk caused by combustion by creating vapor instead of smoke. There are even e-juices that come with 0% nicotine!

How Does an E-Cigarette Work?

There are different types of e-cigarettes, but their basic mechanism is the same. There is a heating element that creates a high enough temperature with the help of a battery to create vapor out of a component that is usually in liquid form.

Is It Safe to Use?

E-cigarettes are indeed healthier compared to most tobacco products. In fact, according to a report published by the Royal College of Physicians, the health hazard that might arise from long-term vapor inhalation will not exceed 5% of the harm you’ll suffer from smoking tobacco.

There are still some concerns regarding vaping, though. For instance, some people are worried that vaping might become a “gateway” to smoking or that it might normalize the habit of smoking enough to invite “never smokers’ to try it out.

Fortunately, it was found in another article also published by the Royal College of Physicians that these are mere assumptions. In real life, vaping doesn’t serve as a gateway, nor does it normalize smoking. It simply presents an effective option for smokers to finally quit smoking for good.

So far, the biggest concern that we receive from the general public about e-cigarettes is the question we posed above: don’t e-cigarettes explode? With the increasing number of users and  growth in device of varying quality and design, the cases of e-cigarettes causing issues, such as bursting into flames, or worse, exploding, are starting to cause alarm. 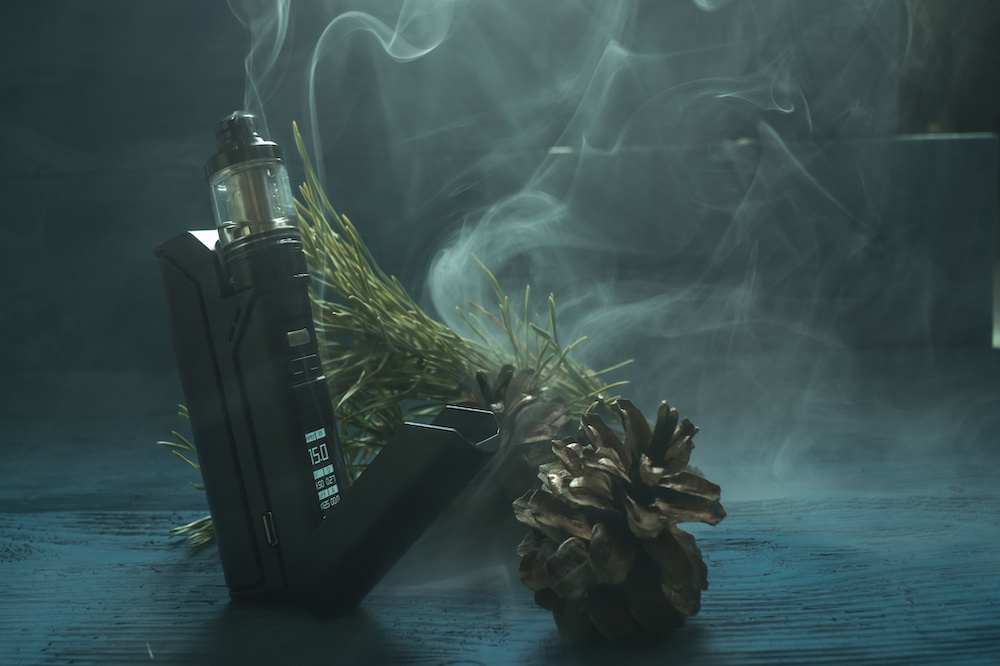 We understand the concern, but people need to realize that:

This section will refer to the different ways of smoking weed, regardless if you enjoy using a pipe, blunt, or a rolled-up joint. As for vaping, we will refer to different types of vaping implements that include, but are not limited to, vape pens and mods.

Now that that’s out of the way, here are the major differences between smoking and vaping marijuana:

Smoking marijuana can cause respiratory issues.

That’s because we tend to inhale weed deeper and hold the smoke bearing THC and cannabinoids longer than tobacco. According to the American Lung Association, it doesn’t matter whatever substance it is you’re smoking; the process itself is the health risk because of the combustion by-products in smoke.

A lot of weed goes up in flames when you smoke it.

Want to enjoy the benefits of THC and CBD? Don’t burn them! A lot of the good stuff in your bud can easily get lost in the process of burning. Vaping, on the other hand, can retain as much as 95% of cannabis compounds even after subjecting them to enough heat to turn them into vapor.

What this means is that you will get to enjoy more of your weed from vaping than you would normally do if you burn and smoke it and heating is controlled to limit heat damage to the compounds that we want to source in the cannabis we are using. This is also the reason why people who switch to vaping from smoking find their stash significantly more potent as compared to before, which means you can use less for the same effect gained from smoking and your stash should last longer!

The bottom line is: vaping simply beats smoking in every aspect—health, potency, and even flavor! There’s only one factor that remains: the experience. We cannot deny the fact that there is something calming and meditative in the ritual of rolling your own joint and sharing it with a friend in a quiet moment. It is an art and a tradition that has been around a long time.

The Health Risks of Smoking a Joint

As mentioned, many look at smoking a joint as a calming practice in itself. If that’s also the case for you, allow us to drive our point home by pointing out the health risks of smoking your masterpiece. Here they are:

Do you love the crisp white color of your rolling paper? We hate to burst your bubble, but paper companies use chlorine to bleach their pristine white rolling paper pads. It is not just for aesthetic purposes either; they do this because chlorine helps the rolling paper to burn significantly slower, allowing you to enjoy that joint longer, but this comes with the health issue of added chlorine in the paper being added to the combustion by-products in the smoke.

Your joint is possibly steeped with chemicals.

Colorants and flavorings on your rolling paper can be very harmful when smoked. Like chlorine, paper companies add unwanted chemicals to your joint, which will make your cannabis less healthy than it should be in the hopes of making it more “enjoyable.”

Then again, that’s not to say that there aren't paper companies out there that offer selections that are unbleached and unflavored. These are definitely healthier compared to their bleached counterparts.

Smoking your joint will cause second-hand smoke.

If you think those chemicals are already problematic enough for your health, consider what it can do to the people around you. Whenever you burn paper and the plant/herb component in the roll, all the chemicals they have go up in flames and mix with the air that we all share.

There is also the old habit of some joint users of rolling joints with some tobacco to help the burn of the joint, and it goes without saying that this seriously adds further to the health risk issues.

It’s not okay to subject yourself to that kind of health risk when there’s a healthier option, but it is another matter entirely when you put others at risk with you who don't want to partake, don’t you think?

In the end, we stand our ground that vaping is still the healthier way to go. Not only will it eliminate the smoke, but you will also be able to enjoy your cannabis’ health benefits to the fullest, guilt-free, and extract more effects from your stash by experimenting with the heat setting!

For more information on cannabis and vaping, please feel free to explore our website and read our other articles as well. See you in the next one!

Is Taking Marijuana Something I Should Always Do? Are Attitude and Mindset an Issue?