There is no point in spending hundreds of dollars on a high-quality grow tent if you don’t pair it with an equally high-quality inline fan. The 6” 442 CFM Inline Fan from iPower has risen through the ranks to become one of the most popular inline fans among experienced and novice indoor cannabis growers alike and we’re going to be discussing why in this iPower 6” 442 CFM Inline Fan Review. 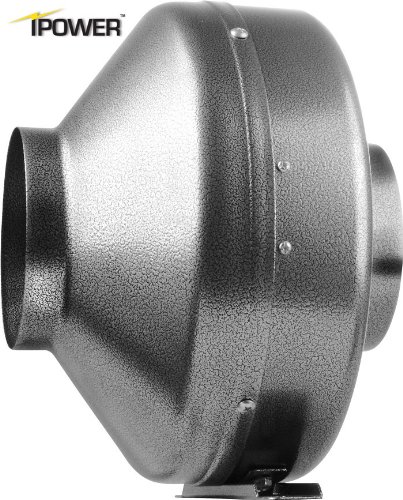 iPower has long been the go-to brand of many a grow tent enthusiast. Much of the manufacturer’s popularity can be traced back to the fact that the majority of its inline fans come packaged with everything needed for installation and the 6” 442 CFM Inline Fan is no exception. Of course, these additional accessories are far from all this fan has going for it.

The iPower 6” 442 CFM Inline Fan is fit for use by all those using a grow tent for their cannabis – or any plant, for that matter – but it is more suited to some indoor gardeners than others. iPower designed this fan to require literally zero maintenance, so it should be at the very top of your list if you are frequently away from home and don’t have a lot of time to dedicate to tending to your grow tent.

Promising minimal noise pollution, the 6” 442 CFM Inline Fan is a great choice if you don’t want to disturb those you share your home with. Selling for just below $50, the iPower 6” 442 CFM Inline Fan is one of the least expensive inline fans you’re going to find without having to sacrifice quality, so you should give it careful consideration if you are trying to keep your spending to a minimum.

Also included in the box you will find a comprehensive instruction manual designed to streamline the installation of the fan. iPower is so confident in the quality of its 6” 442 CFM inline fan that it backs each purchase with a generous 12-month warranty.

The iPower 6” 442 CFM Inline Fan boasts composite fan blades and a center hub which work in conjunction to minimize the fan’s noise output, ensuring silent operation as it purifies the air and controls the temperature of your grow tent. Its 5-foot power cord eliminates the need for placing your grow tent right next to a power outlet, meaning you can store it wherever is most convenient for you.

The fan’s resilient ceramic coating means it stays constantly lubricated and requires no interference from the grower, so you can focus on your plant itself and not the system in which it is growing. The iPower 6” 442 CFM Inline Fan features a maximum ambient temperature of 176° Fahrenheit or 80° Celsius.

If you’ve never fitted an inline fan before, you’re probably feeling a little intimidated by the idea of attempting to do so yourself. If you’re an inline fan novice, we suggest watching the below video. In it, you will be shown how to install your chosen inline fan in your grow tent safely and successfully in as timely a manner as possible.

If you aren’t certain the iPower 6” 442 CFM Inline Fan is right for you, there are plenty of other inline fans for you to consider. Among the most popular of these alternatives is the Goplus 6” Inline Fan.

The Goplus 6” Inline Fan promises many of the features you will find on its iPower counterpart, such as silent operation and easy installation. However, because this Goplus offering is made from plastic rather than metal, it is lighter and less expensive, and therefore preferable if you have never attempted growing marijuana in a grow tent before.

If you have decided to grow your marijuana in a grow tent as opposed to growing it outdoors or unshielded in your bedroom, you owe it to your plant and yourself to fit your grow tent with as fine an inline fan as possible.

It is difficult to think of a reason why the iPower 6” 442 CFM Inline Fan would not qualify as a “fine” inline fan, which is why we recommend it to novices and experienced growers alike. iPower offers the same fan in multiple sizes, so even if the 6-inch model does not suit your grow tent, you likely won’t have any trouble finding an offering from the brand that will.