How Long Does Marijuana Stay in Your System?

It seems like marijuana is more popular now than it has ever been before.

It’s legal in several states, while CBD, the non-psychoactive element of marijuana, is permitted throughout the whole country.

Different interactions happen in your body, depending on whether you’re taking an Indica, a Sativa, or a blend.

If you’re just starting to explore the use of the plant, you may be asking yourself: “How long does marijuana stay in your system?”

That is a completely normal thing to ask, and we’re here to answer that for you.

No one wants to be stoned for an extended period when they have work or other daily events to attend to.

Below you’ll find out about how exactly marijuana travels through your system, what factors can play a role in how long it stays in your body, and more.

How Long Does Marijuana Stay in Your System?

Unfortunately, there isn’t a guide that says exactly how long weed stays in your body because of the many factors that can change how long you feel the effects.

We’ll talk more about those later, and for now, we can give a general guideline when someone asks how long it stays in their system.

If you’re new to using marijuana, you may not know that it travels through several different areas of your body.

It stays in your urine, blood, hair, and saliva, so let’s look at how long it stays in each of those elements.

Most people want to know how long marijuana stays in their urine.

This is usually something that marijuana users will look up if they have a job interview or if they need to give a urine sample to test for marijuana.

These tests use a concentration to find THC-COOH in the urine.

While you may get by having a little marijuana in your pee, there is a cutoff mark of 50 nanograms per milliliter.

That said, generally, marijuana shouldn’t stay in your urine for more than 30 days.

If you’re an avid weed smoker who smokes multiple times per day, it can stay in your system for 30 days or more after your last session.

If you smoke once a day, you’ll likely have it in your system for 10 to 15 days.

For moderate users who enjoy marijuana a few days a week, you can expect it to stay in your urine for five to seven days.

Lastly, occasional users only have to worry about weed in their pee for around three days.

Saliva is a lot less complicated than urine when it comes to detecting marijuana.

It can be seen in both occasional and daily marijuana smokers, and an oral rinse is used to detect if there are THC metabolites in your saliva or not.

For people who use the plant less than zero to three times per week, it can stay in your saliva for one to three days.

If you’re an avid smoker, marijuana can be detected in your saliva for up to 30 days.

When you smoke a joint, a vape, or out of a bong, marijuana is in your bloodstream in just seconds.

You may feel a peak high in less than five to ten minutes.

Marijuana’s half-life in your bloodstream is around half an hour.

While THC itself can be detected in your blood for less than six hours, the metabolite it creates can be found in your bloodstream for almost a month; 25 days on average.

It’s important to note that even though a blood test may not detect THC, it can still find THC-COOH for a few weeks.

Depending on who you ask, you may find out that marijuana may not even be accurately detectable in your hair.

That is because THC can be found on your hair follicles from sweat, secondhand smoke, or even fingers that have come in contact with it.

This means if you roll a joint and then scratch your head, there could be THC traces in your hair.

However, for people who do smoke marijuana often, it can be found in hair follicles up to three months after the last use.

The more often you smoke, the longer it stays in your hair, especially in a small place such as a bathroom or car.

Below are a handful of factors that can influence marijuana tests, along with how long does marijuana stay in your system.

Now that we know about the four different tests, it’s important to note that they’re not all the same.

Even one urine test to another can vary.

When it comes to the sensitivity of a test, some are more sensitive than others.

You’re likely to get more accurate results on a blood test than you would a saliva test.

The dose you consume plays a big part.

If you eat a 10-milligram edible, not only will your high last a long time, but it will show up on a test for longer.

These tests check for THC specifically.

You can eat edibles that are purely THC, which will easily show up on a test when compared to something that’s unpure.

For someone who has the average weight for their height, their body will metabolize marijuana much differently than someone who is morbidly obese.

Though you can be overweight and have a fast metabolism, body fat is what is playing the role here.

Since fat stores marijuana, the more you weigh, the longer it will take for marijuana to leave your system.

While you can use BMI to find the percentage of your body fat, this may not be the best number since BMI also showcases muscle mass.

If you don’t stay adequately hydrated, your high will last longer, so the THC will stay in your system longer.

Drinking a lot of water won’t flush the marijuana out of your system, but it’s important to stay hydrated while you consume marijuana.

Being too dehydrated may throw the results of a test off and not in your favor.

While how much you work out isn’t going to change how your body metabolizes THC unless you’re losing or gaining weight, working out before a drug test may alter results.

A moderate work out can increase how much the THC becomes concentrated in your body.

You are more likely to test positive for THC if you exercise before a drug test.

Another thing that plays a factor in how long it stays in your system and how marijuana shows up on tests is gender.

Simply put, females tend to have a higher fat to muscle ratio in their bodies. 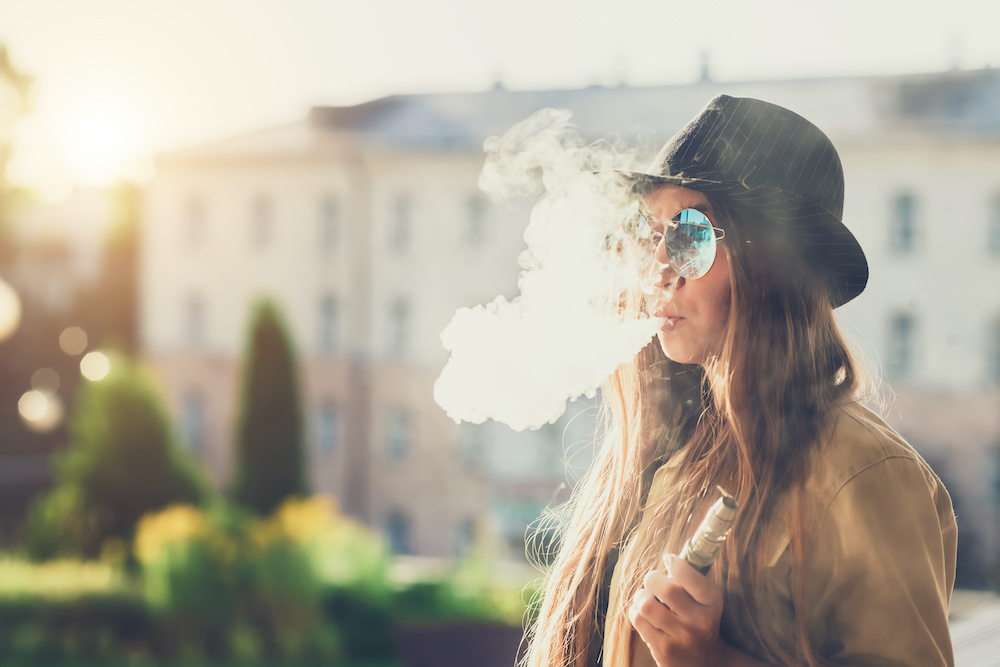 We wanted to include a bit of information about the six most common ways that people enjoy the flower.

This will help you understand how long it takes for each method to onset.

There are are also a few fun facts and pros and cons along with each method.

Smoking is the most popular method and can be done using a marijuana flower or pre-rolls.

Pre-rolls are pre-made joints sold in specific sizes and strands. You can also buy flowers and roll your own joints, pack a bowl, or use a bong.

The effects of the strand you’re smoking will generally peak after half an hour.

After one to three hours, the effects should be gone or start to wear down.

Vaping is a smokeless form of inhaling and is done by using a vape that heats the flower or oil before inhalation.

The increased heat turns the trichomes into vapor.

Just like smoking a joint or out of a bong, the onset happens within seconds.

The peak of the high will happen within the first 30 minutes of inhalation.

The high usually lasts between one and two hours.

It’s important to know that cannabinoids get to your cells through the liver.

Edibles have been around for 50 years and can be a fun way to ingest marijuana.

It can be added to beverages like tea or coffee or ice cream, pasta, gum, and brownies.

The onset of edibles can range from 10 minutes to around two hours; it varies due to one’s metabolism.

Whether or not you’ve eaten beforehand can play a role as well.

If you want an edible to absorb quicker, you must eat something first.

When eating an edible, it stays in your system between four and six hours.

Depending on the dose you take, effects can last for over 20 hours.

Since it can take longer to kick it, this is a method you’ll need extra time.

Tinctures were popular hundreds of years ago, and they’ve started making a comeback with the popularity of CBD.

Tinctures are a way to get marijuana directly to your bloodstream in a short amount of time.

When it comes to onset, tinctures fall somewhere between edibles and inhalation.

It may take 15 minutes to work or could take 45 minutes.

On average, people feel the effects of marijuana tincture within half an hour.

The high will last an experienced marijuana user for about two hours.

If you’re inexperienced, you could feel the effects for 10 hours.

If taken on an empty stomach, effects may last longer.

Another popular marijuana product that’s becoming more and more popular with the rise of CBD are balms and lotions.

They have been used for thousands of years to provide relief for several different skin-related medical issues.

The thing about balms and lotions infused with marijuana is that they can take a long time to onset.

You may be feeling relief in as little as five minutes, but it could also take up to two hours to kick in.

The best part about using these products? The relief can last for up to 12 hours!

This can be a saving grace for people who struggle with chronic pain.

Several things play into how long marijuana stays in your system.

Pay attention to your body, and pick an ingestion or usage method that works best for you.

Keep in mind that edibles take longer to hit and have a more extended high effect.

You may want something discreet such as a vape.

Smoking marijuana is the most common way to use it, and it leaves your system the quickest.

There are so many products to try on the market. You may want to test out a handful of different things to find out what works best with your body.

Whether you’re smoking recreationally or for medical reasons, make sure you’re well-hydrated in a safe environment.

There are a lot of people selling fake products for a quick buck.

Be sure that you’re getting your products from a trusted company.

Does Weed Make You More Creative?

Should You Buy Marijuana Online? The Truth About Online Dispensaries