Home » General » Decarb Weed: How to Do It and What It Entails
GeneralMarijuana InformationMarijuana/Cannabis

Even though marijuana is legal in several states, there is still a lot of information that the general public doesn’t know about the magical plant.

Some people may not know all of the amazing health benefits that are possible from consuming or inhaling marijuana, but can you just take it straight from the plant and put it in a brownie recipe?

Hypothetically, yes, you could do that, but you likely wouldn’t get high.

Decarboxylation or decarb, for short, is a necessary process before weed can be used.

If you’re wondering how to decarb weed, we provide three easiest ways to do so, the differences between raw and decarboxylated weed, and several other helpful tips and informational bits.

Quick Navigation
Decarb Weed: The Different Ways
1. Use the Oven
How to Do It
2. Sous Vide
How to Do It
3. In a Mason Jar
How to Do It
Raw Cannabis vs. Decarboxylated Cannabis
Cannabis Cooking: The Common Mistakes
1. Using Too Much Weed
2. Grinding Weed Too Much
3. Putting Uneven Amounts of Marijuana
FAQs
1. Doesn’t Cannabis Decarb Naturally on Its Own?
2. Does the Decarboxylation Process Get Rid of Mold?
3. Can I Smoke Weed Without Decarbing It?
Conclusion

Decarboxylation is essentially a process involving heating marijuana until specific compounds and atoms are activated.

The heat will get rid of carbon atoms from every single atom within the marijuana flower.

Once this process is complete, the THC and cannabinoids become activated.

For you to feel the psychoactive effects of THC or the healing benefits of CBD, decarboxylation needs to take place.

Think about cooking with marijuana, and decarboxylation will happen naturally when cooking with fats such as butter.

Something to keep in mind with this, though, is that the majority of dishes you make with marijuana won’t likely reach the temperature needed.

Two hundred degrees is the magic number you need to hit when decarboxylating marijuana.

With that in mind, here are three easy ways you can do to get your weed activated and ready to use.

The most common way you can decarb your weed is with the help of an oven.

If you’re choosing to go this route, though, remember that the temperature dial, even if digital, may not be accurate by a few degrees.

On average, it can fluctuate about 20 degrees in either direction, so you’ll want to keep an eye on your buds in the oven.

If you see them turning brown or smelling burnt, take the temperature down a few notches.

Also, if you have an oven thermometer, now is an excellent time to use it.

You will need just three, technically four things to get this done.

Gather a baking sheet, cannabis, parchment paper, and of course, an oven, and then follow the next several steps to decarboxylate weed in your oven.

If you struggled in the past with decarboxylating weed, you’ll have to try the sous vide method.

It’s practically impossible to mess up, but it is far from the most cost-efficient option available.

The cost is due to the necessary tool, which is an immersion circulator.

On average, the circulator should cost you around $100.

That said, it is crucial to have one since it will help you keep a close watch on the temperature.

Another amazing thing about this method is that there isn’t any odor.

Also, all flavors are kept right where they belong: in the cannabis!

Other than the immersion circulator, you will need a large container for water, a zip-top freezer bag, and cannabis.

Once you have these things and you’re ready to go, follow this set of instructions:

The last method is for people living in apartments or just don’t like the smell of weed.

This is also an awesome method to use if you have a history of burning things in the oven.

To decarb your weed using a mason jar, you will need a baking tray, a small towel, oven gloves, cannabis, and a mason jar with a lid.

Follow the next set of directions, and you should be good to go!

Raw cannabis is marijuana that has yet to be cured or dried.

In short, it is raw before it meets any extreme heat after being grown.

After curing, there is a little bit of decarboxylation that happens, but not enough to activate the THC and CBD properties.

That is simply because curing and drying the plant doesn’t put enough heat to fully decarb it.

There are two main active compounds before decarboxylation takes place: THC-A and CBD-A.

When used in the raw form, the two compounds have amazing anti-inflammatory benefits, which can be great for those suffering from acne, muscle aches, or nerve pain.

Marijuana can go bad pretty quickly in raw form, though, so it’s essential to keep it in the refrigerator and use it up quickly.

You can make it last longer by keeping an eye on how much moisture it’s exposed to since generally, it will go bad quickly when around high amounts of moisture. 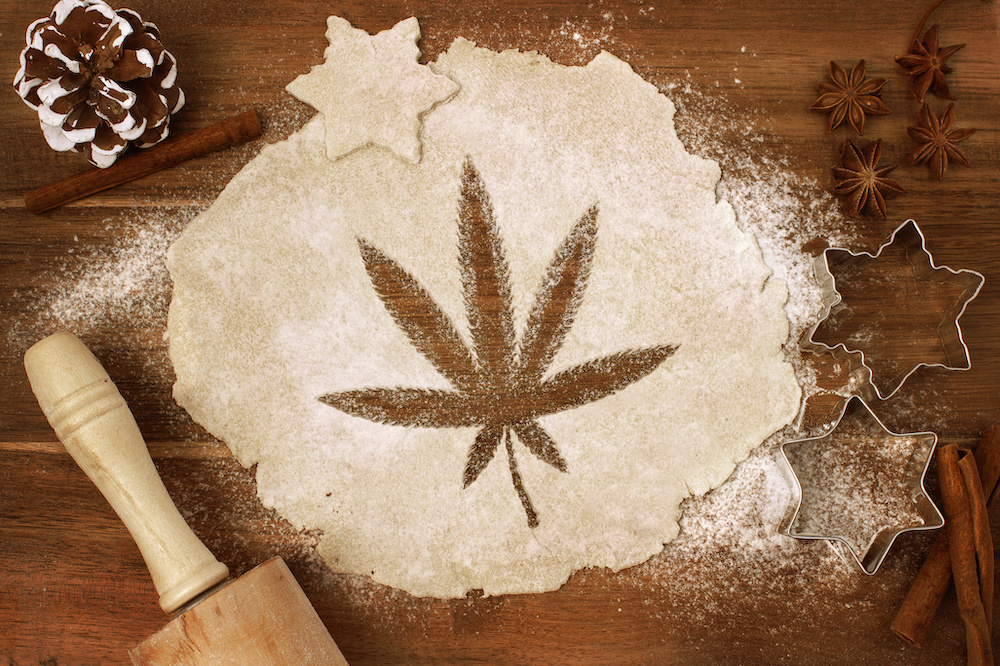 It’s safe to assume that you’re reading this article because you’re interested in making edibles, or you want to add cannabis to your everyday kitchen creations.

Whatever the case may be, there are a handful of things that you should be aware of.

Surely, adding marijuana to your favorite dish can bring a burst of flavor and make for a relaxing evening.

However, there are a few common mistakes to avoid so that you won’t end up wasting good buds and your money.

1. Using Too Much Weed

One of the most common mistakes people make when cooking or baking with marijuana is using too much.

Let’s say you’re trying to make cannabis-infused butter, which we highly recommend, how much do you think you’d need?

Just do a 1:1 ground-up cannabis to oil ratio, and you’ve got the magic number.

If you use more than that, you’re essentially wasting marijuana.

The lipids from the oil connect to the cannabinoids in the marijuana plant.

Once the lipids have connected to their cannabinoid buddies, if you use too much, the other cannabinoids floating around will go to waste.

2. Grinding Weed Too Much

You’ve read a little bit about how grinding weed too much or not enough can affect the decarboxylation process, but it also affects cooking.

If you’ve made edibles before and noticed a powerful flavor that tastes like matcha or grass, you ground the weed too finely.

Also, if you’re recipe calls for straining, too fine of grounds can be hard to strain through.

On that note, there are several reasons to avoid using a kitchen appliance to grind the weed.

One is that it can introduce chlorophyll to the mixture, giving it the matcha-like flavor.

Another is that it can turn the final product into an unattractive olive green color.

Thus, you want to make sure you’re using a hand grinder since it gives you more control and helps to get the grounds ideally coarse.

You don’t want it too coarse unless you’re okay with a toned down flavor.

Something else that you need to look out for is how much marijuana you’re using and where you’re putting it.

Let’s say you are making edible cookies, and you mix it with a gram of coarsely ground cannabis into the dough.

If you don’t mix it properly, you will have a couple of cookies loaded with cannabis, and the rest will just be regular cookies.

No matter what you’re making, it’s vital to spread out the grounds as evenly as possible.

This will also prevent you from eating too many edibles thinking that they’re not working until it’s too late, and you’re as high as a kite for 24 hours.

To prevent that from happening, stir the batter and fold the dough as much as you can without overworking it.

Then, give it one more stir or fold to distribute the grounds properly.

That will also make sure that there isn’t any overbearing taste.

If you accidentally make it too concentrated, you can always mash it up, stir it, and make delicious edible cake pops!

To know more about weed and decarboxylation, here are some of the most commonly asked questions:

1. Doesn’t Cannabis Decarb Naturally on Its Own?

Yes, it does! Over time, THC-A turns into THC.

When weed sits around for an extended period, you no longer need heat during the decarboxylation process.

So why doesn’t everyone do it this way? Simple: it can take years.

It’s incredibly inconvenient to wait around for years for something that you can do yourself in your kitchen in less than two hours.

The only benefit of waiting for it to naturally decarb on its own is that there’s no bad odor that you’d get from baking it.

2. Does the Decarboxylation Process Get Rid of Mold?

No, once your cannabis has mold, decarboxylation can't remove it.

In fact, if your cannabis has mold on it, it should be thrown away.

Anything that the weed got in contact with, such as a glass container, should be washed thoroughly.

Don’t try to pick the mold off and save it, and then toss it in the bin and accept the loss.

3. Can I Smoke Weed Without Decarbing It?

Yes. Since you use heat to light a joint or to vape, you’re decarbing weed as you smoke it.

If you’re looking to make edibles or add in marijuana to cooking recipes, you’ll need to decarb it using one of the methods above.

Using these methods can also enhance the flavor when you smoke it.

As you’ve read, not many people know about the process of decarboxylation.

It is one of the most crucial parts of the process and needs to be done carefully.

Now that you understand what it is, you know why it needs to be done.

Try one or all three of the methods listed above and see how you like it.

The most benefits come from cannabis after it’s been decarboxylated.

Edibles can be fun to make and even better to consume.

Once you decarb weed, you’re one step closer to have delicious edibles right at home.

Remember that ovens can vary temperature quite a bit, and it’s best to keep baking sheets as close to the center as possible.

Be sure to keep an eye on the cooking cannabis to prevent any burning.

Have fun, and enjoy the finished product!

How Long Does a Marijuana High Last?