Best Cannabis Strains Based on Customer Reviews at Leafly

If you are new to cannabis, you might have no idea where to start when it comes to selecting the best cannabis strains. You want to know what to experiment with and how each strain will affect you. The sad is that it can be overwhelming to try and find the right strain for your needs.

It doesn’t have to be that hard, though, even if you know very little about cannabis in general. That is because plenty of cannabis users are more than happy to share their experiences as it relates to different cannabis strains.

In fact, many users keep notes on what strains affect them most and how. They then are happy to share their reports with others. This can be really helpful to new consumers.

Here, we take a look at the most popular cannabis strains, based on customer reviews from the most seasoned of consumers. You’ll find essential things you need to know about the top six cannabis strains available.

Blue Dream is easily considered one of the top cannabis strains. It is a hybrid but leans more toward its sativa qualities. It originally came from California and quickly became one of the most popular strains on the West Coast.

Its makeup consists of just about the same amount of THC as you would find in the average cannabis strain. It also doesn’t have much CBD to speak of, at less than 1%.

You get just enough invigoration while also enjoying a stable relaxation quality. It is calming enough that both new consumers, as well as the more seasoned users, both enjoy Blue Dream. Its terpenes are dominated by an herbal aroma, with hints of pine and peppery. It also gives off a nice berry scent.

You’ll enjoy quick relief of your symptoms without much sedation when you use take Blue Dream. It is a strain also used successfully by patients who suffer from depression, pain, and nausea. This is an excellent option for anyone looking for a high level of THC.

This strain has received over 13,000 reviews where users have given their first-hand experience of Blue Dream’s effects.

Most users rate their feelings of Blue Dream as happy and euphoric. Its top symptom relief relates to helping alleviate stress, followed by aiding in the ease of anxiety.

The only real negative that seems to be fairly common is dry mouth, with about one-third of users experiencing the effect.

Sour Diesel has an energetic feel to it. As for its chemical makeup, it has the same amount of THC you could expect from the average strain. There is also less than 1% CBD included. Its terpenes are dominated by a peppery aroma, but it includes some citrus and herbal hints of aroma, as well.

Sour Diesel is often referred to as Sour D. It gets its name from its general aroma, which resembles diesel, and is quite pungent.

It started its rise in popularity all the way back in the early 1990s and is largely believed to have been a derivative of Super Skunk and Chemdog 91. This strain is a huge favorite for anyone looking for an alternative that can help relieve some medical issues.

This strain acts fast. Along with its fast-acting qualities, it is also quite energizing. When those properties are paired with the cerebral effects it delivers, this strain has proven quite popular and appreciated by users. It is a top choice for those who suffer from depression, pain, and stress, especially given that Sour Diesel has very long-lasting effects.

Most users highlight happiness as the most prevalent feeling experienced with Sour Diesel. Close behind are both the feeling of upliftment and euphoria. Those users who seek Sour D for its therapeutic properties, stress is the number one ailment helped, followed closely by depression.

There are not a lot of drawbacks associated with Sour Diesel, according to the over 7,000 reviews available. Of those drawbacks, dry mouth is the top one, with a little over one-third of users listing it as a negative.

Other drawbacks include dry eyes, dizziness, headache, and paranoia. On that note, those negatives seem to impact a tiny segment of the population that uses Sour Diesel. 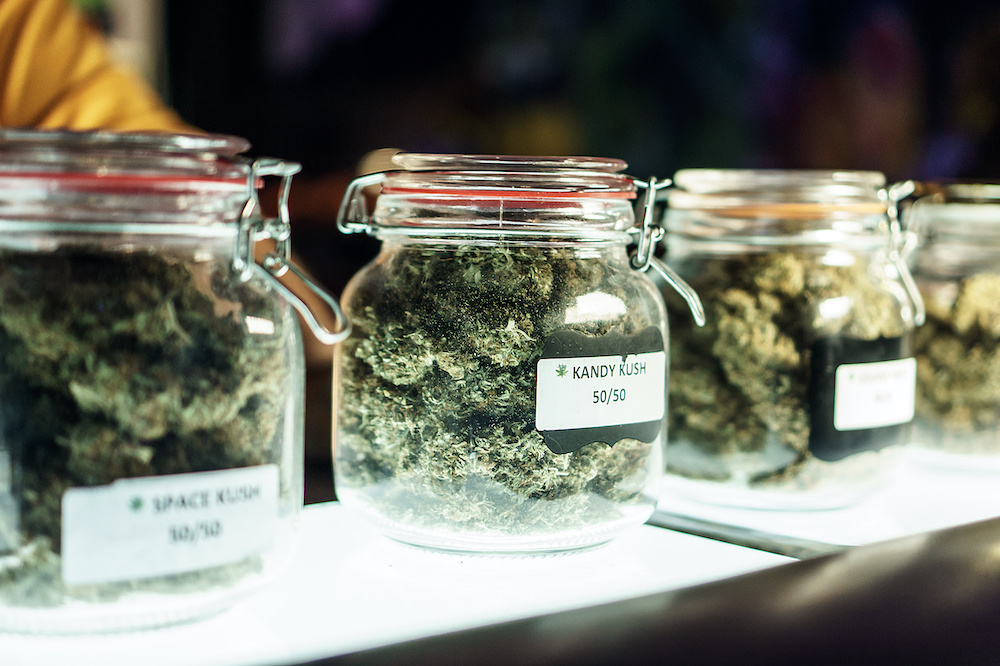 GSC, previously known as Girl Scout Cookies, is a name known for making its users feel happy and giggly. This strain contains anywhere from 16% to 21% THC, which is about what you can expect from the average strain. It has won several Cannabis Cup recognitions, given its THC component.

This strain doesn’t contain much CBD at all. It has less than 1% in total. The strongest terpene in this strain is Caryophyllene, which gives off a peppery aroma. The other two terpenes you’ll notice are limonene for a citrus scent and humulene for a hoppy aroma.

This strain is a cross between Durban Poison and OG Kush, so its aroma is earthy and sweet, and it produces a great relaxation effect. You don’t need a lot with this hybrid strain.

This strain has many phenotypes available, including Platinum GSC and Thin Mind. These phenotypes offer at least a slight variation when it comes to effect and appearance. If you want to grow this strain yourself, you want to wait for a full nine to 10 weeks for them to fully mature.

This strain is a great option for any users looking for a lot of relief from several ailments. The most common ones include appetite loss, nausea, and pain. This strain will absolutely make you hungry, so keep that in mind before use.

According to users’ reviews, the GSC strain is known for its properties that give you a feeling of happiness and relaxation, almost equally. Other top feelings associated with GSC include creativity, upliftment, and euphoria. This strain helps with stress, followed by depression, pain, anxiety, and insomnia.

For negatives, there isn’t a lot. Users most often complain of dry mouth, but less than one-third of users even remark on it.

Other negatives are even less prevalent. Those other drawbacks include dry eyes, dizziness, paranoia, and anxiety, from most frequent to lease common. Anxiety is only complained about by 4% of users who reviewed the strain.

Green Crack is one of the more energizing strains you can find. In fact, most other strains pale in comparison when it comes to the energy you’ll find in Green Crack. If you need a pick me up, this is the strain to try.

It offers a fruity and tangy flavor that will remind you of mango and is best suited for daytime use. You’ll also hear it referred to as Green Cush or Cush because some find its name to be off-putting.

The Green Crack will help you to fight off depression, stress, and fatigue to keep you going throughout the day.

The feeling most users associate with Green Crack is energetic, by far. Others remark that it brings about happiness, feelings of being uplifted, euphoria, and a sense of focus. Users also claim that it helps with stress the most, which is closely followed by relief from anxiety and depression, and then pain and fatigue.

For negatives, there isn’t a whole lot. Fewer than one-third of consumers state that it can cause dry mouth. From there, some users complain of dry eyes. Then, very few users claim it can cause paranoia, anxiety, and dizziness. Those last three negatives have very few complaints from users.

OG Kush is a THC Dominant strain with less than 1% CBD. Its THC percentage is between 16% and 20%, so you’ll get just about the same THC as what you’ll find in other strains.

For terpenes, the strongest is myrcene, which gives off an herbal aroma. Others include limonene for a citrus scent and caryophyllene for a hit of pepper.

First harvested in Florida, OG Kush was crossed with a plant from Amsterdam. The creation was a hybrid that has a unique profile when it comes to terpenes. The aroma includes hints of skunk, spice, and fuel.

OG Kush first landed in Los Angeles in the late 1990s and quickly become a well-known strain. There are plenty of phenotypes available, including SFV OG, Ghost OG, and Tahoe OG.

The effects of OG Kush are pretty universal, according to users who choose to review the strain.

A whopping 60% of reviewers commented on the feeling of happiness they get from OG Kush. That’s closely followed by relaxed and euphoric, which are equal in their prevalence.

Feelings of upliftment and hunger follow those. One thing to keep in mind is that it is pretty common to feel hungry with this strain.

For those who use the strain for its medicinal properties, stress is the number one ailment this strain works to help alleviate. Others include anxiety and pain, both equally managed, followed by depression and insomnia.

Less common negative effects include paranoia, dizziness, and headaches. All three of the last negatives had a prevalence rate of less than 10% from those who reviewed the strain.

Grandaddy Purple is an Indica strain with 15% to 19% THC, which is average for most strains. The CBD content is less than 1%, making it a THC-dominant strain.

The strain has terpene aroma dominated by myrcene for an herbal aroma. Other terpenes include caryophyllene for a peppery scent and pinene for a hint of a pine aroma.

Grandaddy Purple is a very well-known indica strain that is a cross of Big Bud and Purple Urkle. It gets its berry and grape aroma from Purple Urkle and maintains a compact, oversized bud structure from Big Bud.

The flowers of this strain bloom into deep purple shades which really shows up against its white resin backdrop. You get both relaxation and euphoria with Grandaddy Purple. It is used most by consumers for relief from stress, appetite loss, muscle spasms, insomnia, and general pain. This strain has huge yields after just a 60 days flowering period, which makes it a great option for harvesters.

The effects highlighted by reviewers of Grandaddy Purple are almost all consistent with each other.

The Grandaddy Purple strain is remarked as being one of the most relaxing strains available, with 60% of reviewers listing relaxed as the top effect. That is followed by sleepy, which was noted by half of the reviewers.

Other feelings included happy, euphoric and hungry. This is a strain that will absolutely make you want to sleep and eat, so keep that in mind.

Reviewers also remarked on Grandaddy Purple’s ability to help with stress, followed closely by the management of pain. The next ailments helped are anxiety, insomnia, and depression.

There are very few negatives listed by the reviewers of Grandaddy Purple. The biggest drawback for users is dry mouth, which is listed by a third of all reviewers. Next is dry eyes followed by dizziness, paranoia, and headache. The last three effects had very few reviewer complaints.

Everyone’s biology is different, which means that how your body will react to a strain may be different from the experience of another person with that same strain.

That said, one of the best ways to find the cannabis strain that works for you is to rely on the reviews shared by people who already tried those strains. Using our notes above, you’ll be better prepared for any adverse effects, but you’ll also know what to expect when it comes to the feelings associated with the top six cannabis strains, as reviewed by customers on Leafly.