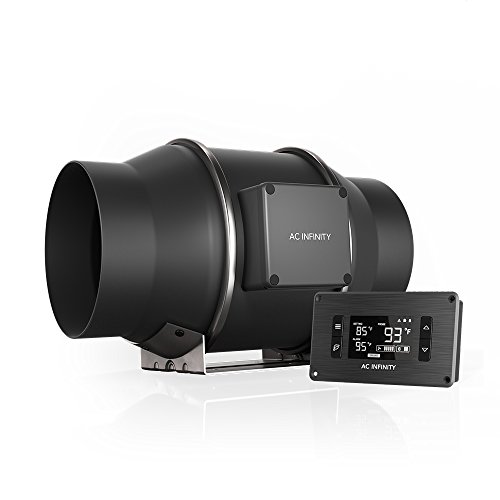 AC Infinity is one of the world’s top manufacturers of cooling systems and the products which fall under its CLOUDLINE umbrella have been utilized by growers of cannabis and more traditional plants alike to keep their growing tents at an opportune temperature. Many of these growers would argue that the T6 is the jewel of the range.

Selling for close to $150, the AC Infinity CLOUDLINE T6 is certainly among the more expensive inline fans on the market, so it is generally only recommended for experienced growers. Novices likely won’t be able to justify such an expense, nor will they have any need for such a complex inline fan right off the bat.

AC Infinity designed this fan to be used for extended periods of time, which makes it a good choice if you are frequently away from home and cannot be there to turn off your fan to prevent overheating. Similarly, automatically adjustable fan speeds mean even when you’re home you won’t have to pay too much attention to the device and can instead focus your energies on caring for your plants.

AC Infinity also includes all necessary mounting equipment with each unit, so you won’t have to worry about having to drop more cash to get the tools needed for installation of the device.

Owing to its high price tag, it shouldn’t come as any surprise that the AC Infinity CLOUDLINE T6 ranks among the most feature-rich inline fans on the market right now. Arguably the most notable of its many features comes in the form of its intelligent controller. This intelligent controller uses an onboard processor with active temperature monitoring to automatically adjust the speed of the fan to adequately combat changes in temperature. This controller can also be set at customizable speeds and promises power on-off memory.

Even when run continuously, the COUDLINE T6 will produce only minimal noise, so you won’t have to worry about disturbing your roommates with your hobby. The CLOUDLINE T6 boasts what the manufacturer describes as a “mixed-flow design.” This mixed flow design ensures the fan continues to perform to a high standard even in high static pressure environments, keeping dust and moisture at bay.

If you don’t want to drop close to $150 on an inline fan for your grow tent but aren’t willing to sacrifice quality for a lower price, we suggest you take a look at the 6” 442 CFM Inline Fan from iPower. In many ways, the iPower 6” 442 CFM Inline Fan is similar to its more expensive AC Infinity alternative. For example, this inline fan promises minimal noise output and is constantly lubricated, meaning you won’t have to pay it much attention to ensure its continued high performance.

The main difference between this offering from iPower and the AC Infinity offering which has dominated the bulk of this article comes in the form of a price tag. Thrifty indoor gardeners will be able to get their hands on the iPower 6” 442 CFM Inline Fan for less than $50.

Yes, the AC Infinity CLOUDLINE T6 will set you back more than you would probably like to spend, but for your money you’ll be getting what is arguably the finest inline fan on the market.

With its silent operation, mixed-flow design, and smart programming, the CLOUDLINE T6 will provide the dedicated indoor horticulturist with the knowledge their cannabis will grow to full maturity, even if they aren’t always there to keep an eye on it. For many, that peace of mind alone is worth the money that AC Infinity asks for this product.